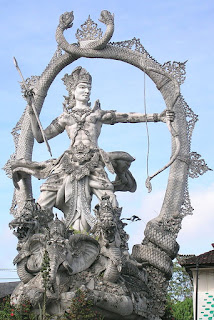 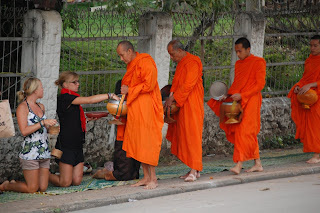 CH 14 unnecessary misogynistic rant CH 15 the Buddha gets his brother Nanda to leave Sundarika CH 16 then he takes his son with him as well, much to Suddhodana's dismay and then he returns to rajagriha CH 17 the merchant Anathapindika collects alms for the Buddha and the monks Buddhist Monks Collecting Alms a girl donates her only dress; she dies the next day and becomes a goddess & comes back to earth and learns from the Buddha CH 18 six princes decide to join the Buddha. they give all their jewels to a barber, but then the barber joins them too! CH 19 Nanda forgets about Sundarika after he is shown an Apsaras, but after he manages to forget about the Apsaras he makes a robe for himself that makes him look like the Buddha, which he gets in trouble for CH 20 Suddhodana dies Bibliography:  The Life of Buddha , Herold
Post a Comment
Read more 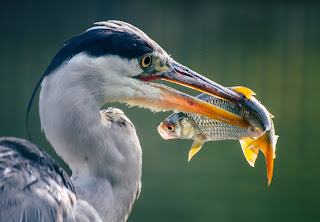 CH 8  Sariputra and Maudgalyayana become the Buddha's disciples also,blood comes out of Sanjaya's mouth for trying to convince them to stay :( CH 9  a lot of people are angry that the Buddha is converting so many people and taking them away from their normal lives, but they are eventually won over CH 10 Suddhodana sends a lot of messengers to Siddhartha but none of the messages get through because the messengers get caught up in the Buddha's preaching, until he sends Udayin. CH 11 before he leaves, he tells the story of the crane and the crab! to Vimbasara's son "Crane" (really a heron) eating fish CH 12 I hate this story. CH 13 the Buddha is begging and Suddhodana hears about it and is confused, so the Buddha tells him the story of Dharmapala Bibliography:  The Life of Buddha , Herold
Post a Comment
Read more 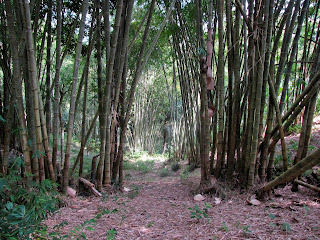 CH 21: the three daughters of Mara try to seduce Siddhartha; he turns them into hags but later turns them back Mucilinda, the snake king, coils around him to protect him from weather Traphusha and Bhallika give him food in stone bowls furnished by the gods CH 22: Siddhartha is too lazy to preach to dumb people who won't understand his teachings, but Brahma convinces him to have mercy and preach to everyone CH 23: Siddhartha goes to Benares to preach to his former disciples CH 24: teaches to his disciples middle path: neither self-mortification nor pleasure eight-fold path: right faith, right resolve, right speech, right action, right living, right effort, right thought, right meditation CH 25: the five become his disciples Yasas, the son of a wealthy merchant, becomes his disciple story of the hermit and the hare---sounds like a Jataka tale! Yasas's friends convert as well when there are 60 disciples, they scatter and the Blessed One goes to Uruvilva CH 26: the Buddha teaches
Post a Comment
Read more 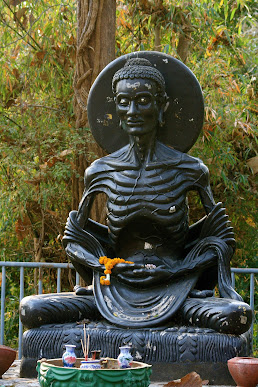 CH 15: Siddhartha rejects the doctrine of Arata Kalama! No use in suffering ("renunciation") for its own sake! wow this gets more and more interesting CH 16: rejects a king's offer of riches, steals disciples from Rudraka, son of Rama (a different Rama?) CH 17: Siddhartha sits down to meditate and swoons. Gods & people alike think he's dead He starves himself but finds that it doesn't help, so he begins to eat (fed by the ten daughters of the head man of Uruvila) Emaciated Siddhartha his disciples think he is a fraud and leave CH 18: Siddhartha makes clothes for himself out of a dead man's shroud, receives signals that he is about to become a Buddha and then finds the tree of knowledge that night CH 19: Mara, the Evil One, tries to fight Siddhartha even though his son warns him against it, but he loses proof of Siddhartha's generosity is in his past lives CH 20: Siddhartha reaches the conclusion that ignorance is the root of all evil & becomes a Bu
Post a Comment
Read more 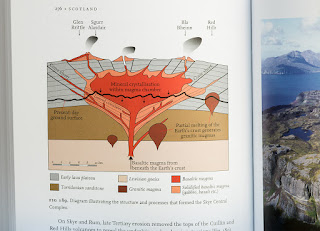 (added to portfolio ) Mary was the youngest of six children and the only daughter of a devout Protestant family. She was homeschooled all through elementary school and high school, but it was in college that she met Arnold, at the time a lanky, nervous geology student who liked rocks and mountains better than anything. He worked at the front desk of the library, which Mary frequented. He was bemused by the eclectic assortments of books she checked out each week. (She was working her way through all the things she hadn't been allowed to read at home.) She, for her part, was equally struck by this bespectacled young man who sat surrounded by stacks of books about volcanoes and earthquakes when he had all the books of the world at his fingertips.  Volcano book Over the course of the semester they struck up a friendship that continued even when he stopped working at the library and she stopped reading so much, her attention diverted by the demands of school and life. During Mary's
Post a Comment
Read more